Yesterday while relaxing on the couch it occurred to me that the tide was up, the heat and humidity were down, and no storms were in the forecast.   As if catapulted from my seat with this revelation, I made a dash for my camera, life-jacket and paddle and down to the creek I went.  It is rare that I sail out on my own, but sometimes that’s the best way to observe nature and just enjoy the serenity of the creek.

The first unexpected sight I came upon was of a beaver dam.  I’ve heard the beavers slap their tail before when entering their territory, but had still yet to see one.  Yesterday was my first sighting of any dam, so I was excited to be able to see it up close.  I heard the warning slap of the tail when I ventured back for more pictures later, but still never caught a glimpse of the owner of the slapping tail and decided to take his warning seriously, paddling away after a few pictures.  I had been hoping to get a picture of the beaver himself, but they are elusive little characters.

Further down the creek I spied a squirrel grabbing a small branch to take away to its nesting spot.  He froze when he came up out of his hole and saw me, so I was able to capture some cute pictures of him peeking out.

I watched as ospreys circled the creek looking for their next meal and observed a smaller bird giving chase to a large flying insect, catching up to it eventually and carrying it back to  its nest.  The butterflies were out flitting about the plant life on the banks, seeming to enjoy the day as much as I was, while numerous dragonflies skimmed the water in every direction in search of insects. Yes, the creek was full of life visually and audibly and I was ever so glad to be out there among it.

On my way back I caught a glimpse of a great blue heron perched atop a large, dead tree in the creek preening its feathers.  I’ve never been able to get that close to a heron without them noticing and immediately taking flight…screaming insults at me all the while, of course.  This heron broke all the rules and sat there after preening for at least five minutes while I let the boat simply drift around as I took pictures.  Finally he or she had enough of modeling and took flight across the creek, but the unexpected photography session was definitely a treat! 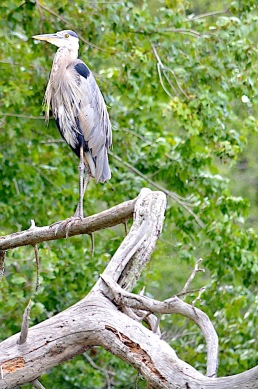 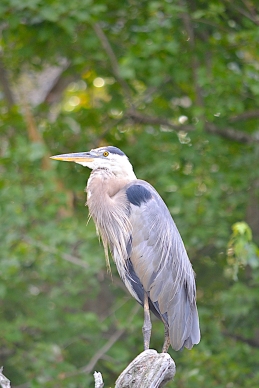 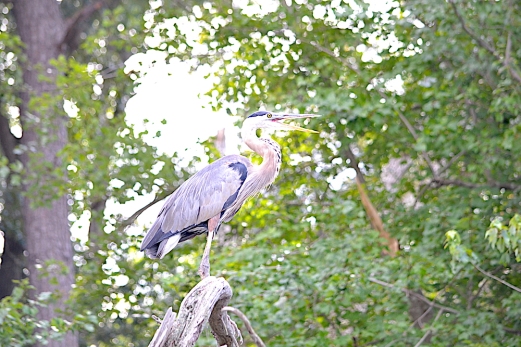 After getting back from my rewarding time on the creek, it was still too beautiful to go inside, so I decided to linger by the creek on a bench enjoying a cup of afternoon coffee. My husband joined me, and then we actually spotted him above the water-finally!

My last unexpected treat was getting a close up glimpse of a green heron.  In our six years here I have only spotted it once, and that from very far away.  The pictures I got are blurry as I had to shoot as soon as I saw him, but I was very happy to finally see him nonetheless. 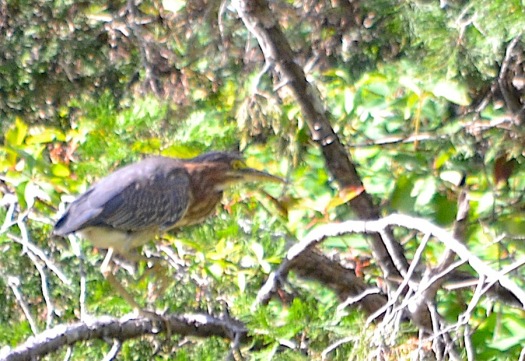 For a much better visual of him and to read more about this particular heron and others check out this link .

Until next time, wishing you unexpected treats as you explore your own beautiful corner of the world!