“No price is set on the lavish summer;
June may be had by the poorest comer.”
–  James Russell Lowell, The Vision of Sir Launfal

Dust from the fireworks has settled, Princess survived yet another year of booms and bangs, sure “they” were after her, and once again, like every year, I wonder how it’s possible that so much of summer has already gone by.

As I enjoyed looking back on my morning pictures from May once June arrived, I have done the same for my morning times in June. I love looking back at photos taken and relive some of the moments and memories of my early, quiet times on the porch and beyond.

The turtles were out in full force this month. I like them a little more when they stay in the creek, if they happen to be snapping turtles that is. I have not seen our pond visitor again up close as I did in May, but I spotted it’s relative sunning on this log with a friend….

and another duo with the same idea further out…

I always love the way the early morning sun highlights the ferns and glistens on the waterfall…and the moss on the rocks, well, that’s just the icing on the cake.

The American bullfrog in our pond that we have dubbed “cave-frog” still occupies his cave and was seen peeking out beyond the water grass one morning between croaks.

He is loud, but I had no idea just how loud till my neighbor across the street told me she could hear him! She is a nature enthusiast herself, so it was an appreciation not a complaint:)

As for flying creatures, our little hummingbirds have been enjoying their new feeders……..

And “Harold” was observed on several breakfast hunts…

Upon arising one morning I was greeted with our first hydrangea bloom of the summer, and by evening the same bush boasted several more blooms.

Replenishing my morning cup of coffee on another morning, I heard scratching on our porch, screen door. I looked to see a real cutie, who upon seeing me quickly ran off.  I captured him resting his very visibly pounding heart before ascending the tree. The poor guy was beyond shaken.

I have no idea why he was intent on entering the house….I would say he was drawn by the aroma of coffee, but it was more likely that he was running from our cat, “Gladiator Gabby.”

The large trees in our back yard are a wonderful habitat for birds, especially the woodpeckers, but it was the sunlight streaming through the hole in the above tree that caught my eye on this particular morning.

Leaving a hotel one morning after a weekend trip, my son pointed out some adorable ducklings enjoying a morning swim.  It was the mother with one of the ducklings near a blooming lily, that, of course, captured my attention the most… 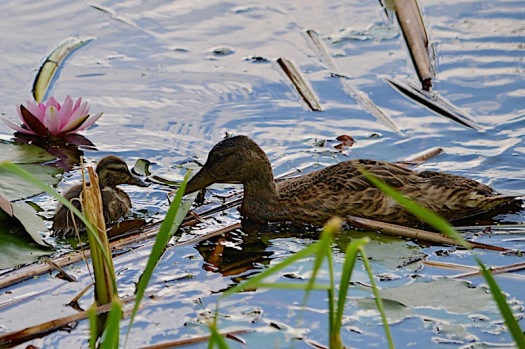 And lastly, I have  Princess to thank for the following picture taken at the end of June.  Her morning vigil by the front door resulted in a sight I am ever so glad to have seen…

and kudos to the deer for allowing me to photograph her in front of such a lovely, blooming backdrop. She seemed to enjoy her morning stroll through the neighborhood, so I may see her again in the future. 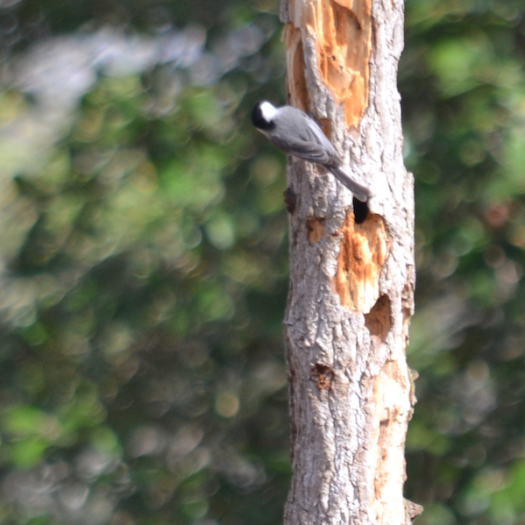 While sitting on my porch last week – drinking coffee of course – I noticed a chickadee perching on this dead tree that I previously had paid very little, if any attention to.

It’s early spring, so I thought maybe it was looking for holes in which to nest, but it wasn’t long before I saw another bird, the hairy woodpecker, pecking away looking for insects on this same tree. Needless to say, that chased away the chickadee, who perched on a small branch to the side of the dead tree, waiting for the bigger guy to get his fill and move along.

He was in for a wait, however, because in moments hairy was replaced by the even larger red-bellied woodpecker….who doesn’t just peck, but hammers away!

A closer look at the beak in the below picture of “red” reveals his hammering produced a tasty treat.

In my mind, this little dead tree was going to provide many photographic delights in the future, and I was more than up to the task.

Fast forward several days….my husband had contacted people to come and clear away some of the brush and fallen branches, and yeah, you can guess where this is leading…. right up to the ode. I had never mentioned my newfound delight in this little, dead tree to my husband, so my dear, dead tree was part of the doomed.

I’m not going to wax poetic or resemble anything like an ode should be, but suffice it to say, I sure am going to miss that little, dead tree and all the moments that could have been. 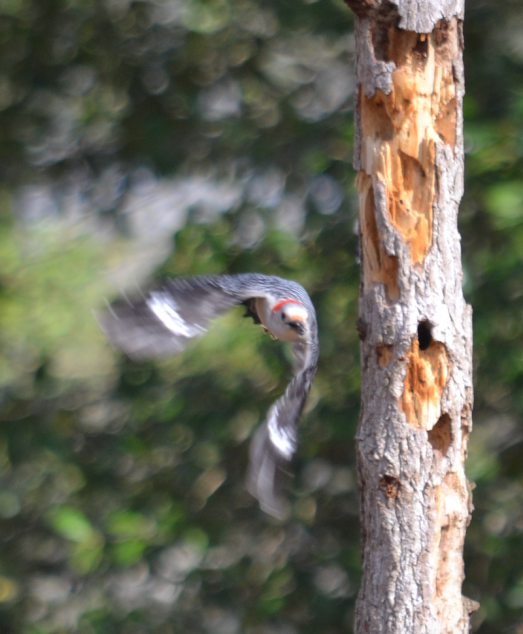